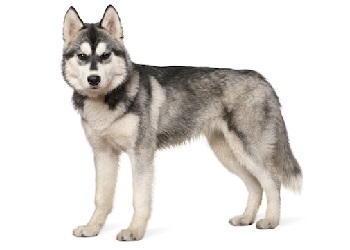 Siberian Huskies come from north-eastern Siberia from the harsh Siberian Arctic region. They were used by the Chukchi Eskimo people to pull heavy loads over long distances.

The Siberian Husky is one of the world’s oldest breeds of dog which later came to be used on polar expeditions. They were eventually imported to Canada and Alaska as sled dogs and became popular family pets. These days they are used in recreational and competitive mushing.

The Siberian Husky is a friendly, affectionate dog with a free spirit and high energy levels

Most Huskies are friendly, alert, affectionate and playful, but need early socialization so as not to develop dominance. The Husky is easily bored and if left alone for long periods will howl and become very destructive.

They have moderate energy levels but high exercise needs. A consistent and firm training regime is needed as the Husky can be strong-willed and challenging to train. Owners need to be creative with training and give the dog variety as Huskies have a low boredom threshold.

The Husky is not a possessive dog and not suspicious of strangers so it is not an especially good watchdog, although its size could put off a stranger. Most Siberian Huskies are good with other dogs, but their high prey drive makes them unsuitable to live with cats and small pets.

The Husky is an escape artist, especially when home alone and bored and therefore needs high and robust fences, and measures to prevent digging under fences, too.

Siberian Huskies are almost like cats in the way they keep themselves clean, requiring some brushing and minimal bathing. They lose a great deal of hair when they shed their winter coats, and more regular grooming will be necessary during this time. The Siberian Husky has a double coat – a soft undercoat and a protective and water-proof outer coat, which provides insulation from heat and cold.

These dogs need an extraordinary amount of exercise – a long, long run or two hours of vigorous activity. They should be exercised on a lead because they have little or no road sense.

The affectionate temperament of the Siberian Husky makes them good with children, but like with all dogs, supervision is important when together. A confident, experienced owner with a strong sense of leadership and responsibility is the ideal Husky owner.

This is not a breed for apartment living. Siberian Huskies need vigorous exercise or they will get bored and destructive, but they can be happy in small yards as long as they get out to exercise regularly. Reputable breeders of Siberian Huskies will screen for hereditary diseases, in particular eye and hip problems, and only breed dogs which are clear of these. When purchasing a dog, ask for evidence of eye and hip tests of the dog’s parents.