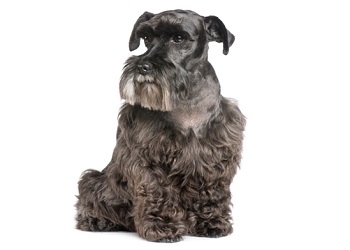 Schnauzers are from Germany and come in miniature, standard and giant sizes. They were originally large farming dogs, specifically used for herding and guarding.

It is thought that the smaller dogs – were bred out of a desire to create a duplicate mini version of the larger dogs, which were such good workers. The smaller dogs subsequently became useful to farmers in other ways – to keep vermin away from barns and the homestead. The breed dates back to the 16th Century and it is thought to have possible poodle and pinscher ancestry.

The breed’s name comes from the German word ‘schnauze’ – meaning ‘muzzle’ or ‘snout’ and Schnauzers have a characteristically long mustache. Standard Schnauzers came to Australia around the 1930s, but the Miniature breed did not make an appearance here until some 30 years later. Giant Schnauzers were first imported in 1978.

Schnauzers are the perfect playmate in a size to suit!

Schnauzers are described as ‘spirited and alert’. They have lots of energy and are generally good with children because they are not typically aggressive, and they like to play. Schnauzers are placid, obedient dogs and can be easily trained.

Overseas, the larger sizes in the breed have been used as rescue dogs and the smaller ones are increasingly used in pet therapy. Schnauzers need a kind, but assertive master, as well as socialization and some obedience training from an early age so they know what’s expected of them. However, as much as they might be quick learners, they can also be easily bored, and boredom can mean they become destructive.

They make good watchdogs, tending to bark to signal the alert, rather than bite.

Schnauzers have a double coat – a rough outer layer with a soft underside. This requires regular brushing, bathing and clipping, especially around the snout – that long facial hair can get very grubby!

They shed minimally, which still needs to be a consideration for owners with allergies. Some information suggests that the Miniature Schnauzers carry a color-fading gene, which means their coat can lighten over time. Schnauzers like to be active and they need at least a 30-minute walk every day.

Schnauzers (particularly the Standard and Giant) are best suited to active families with school-age children, but whichever size you choose, you can be certain the Schnauzer will be a great pet because of its even temperament.

Schnauzers do like a garden to rummage around in, although Mini Schnauzers can be happy in apartments so long as their exercise needs are met. Because the Miniature is a compact size, it also makes a good companion for the elderly – it is easily portable as well as affectionate, dependable and easy to please.

The larger breeds of this dog, the Standard and the Giant, are best-suited to younger owners who can keep up with their energy levels and strength. They need a firm hand, especially when walking on the lead.