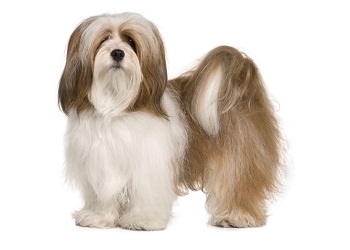 The Lhasa Apso originated in Tibet more than 4000 years ago, making it one of the world’s most ancient breeds. It was used as a watchdog in Buddhist monasteries along with the Tibetan Mastiff. In the early 20th century, they were introduced to England and became exotic house pets and lap dogs.

A friendly fellow that is brave and independent, the Lhasa Apso is also loving and loyal

Despite their size, the Lhasa Apso is a brave, feisty little dog that is independent and fearless, as well as very affectionate and loyal towards their owners. They are said to be very emotional dogs. Lhasa Apsos have a moderate energy level and therefore do not demand a lot of exercise. They can appear stand-offish, especially with strangers. But what they are really displaying are their alertness and attentiveness, which make them an excellent watchdog.

Lhasa Apsos will bond particularly well with humans and prove to be an excellent nature friendly pooch. One of their quirkier traits is to sit up high and watch what is going on in the family. They need good socialization with both people and other dogs from an early age. They usually enjoy training and are quick to learn. If properly trained as a puppy, the Lhasa Apso will enjoy bathing, hair combing and clipping.

Grooming a Lhasa Apso is not for the faint hearted. Once clipped, they really only need to be groomed every six to eight weeks. The breed sheds its coat in summer and needs the hair between the toes trimmed and the ears plucked. The Lhasa Apso can become overweight if overfed. Fresh, raw food is best rather than a calorie-rich dry or tinned food diet. It needs regular, daily exercise but only a short walk is needed. Like all dogs – The Lhasa Apsos need tick, flea, worming treatments regularly. Speak your veterinarian on treatment options.

The Lhasa Apso is a good family dog, but it does not like rough handling by young children so this breed is not recommended for young children with new (inexperienced) dog owners. Lhasa Apsos require a firm owner who sets clear rules and boundaries as they can easily walk all over their owners and become difficult to handle. This does play in with good socialization and training.

It is a dog which demands respect and is a wonderful lap dog for an older person as it doesn’t need a great deal of exercise. However, an elderly owner may struggle to keep up with the grooming. Lhasa Apsos are good for apartment living, as long as they get a daily walk.