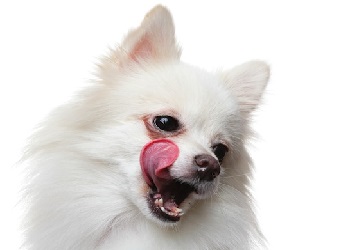 The Japanese Spitz was bred in Japan in the 1920s, probably the combination of a number of Spitz breeds. There is one theory that it originated in Scandanavia about 6000 years ago and made its way to Japan in around 400 AD where they were highly regarded as companion dogs.

Nowadays, they are known to be the low maintenance companions for today’s busy lifestyles.

The Japanese Spitz is happy, full of life, fun and extremely loyal and affectionate

Don’t be fooled by this powder puff of a dog. The Japanese Spitz is fiercely loyal and extremely protective of its family. It is brave and takes the duty of a guard dog seriously.

The Japanese Spitz thrives on attention and is known for its great courage, affection and devotion. Although it would prefer to be indoors as part of the family, it also loves to be outdoors and be active. The Spitz is intelligent, playful and obedient and is an excellent children’s pet.

This breed is shy with strangers but lives well with other pets, including cats. It can be dominant over other dogs. The Spitz is an affectionate and loyal companion for life.

The Japanese Spitz is an active breed but doesn’t need more exercise than a daily walk. They are not a “set and forget” dog, and can be destructive when bored so you cannot leave them in your back garden without stimulation. Toys, walks and lots of attention are the order of the day. For their size, they can jump very high fences and need to be securely enclosed.

The Japanese Spitz is an intelligent breed and although it has an independent streak, will quickly learn to do what you want. Positive reinforcement with food rewards and praise makes them eager to learn. The Spitz is a little strong-willed so they need to be persuaded to see things your way with gentle, reward-based training.

The Japanese Spitz needs grooming twice a week and bathe monthly. Use a pin brush which reaches the undercoat and prevents knots and matting. The Spitz will also help keep itself clean, grooming itself like a cat. During their early months, this breed develops itchy gums when teething and need a safe toy to bite.

The Japanese Spitz needs daily exercise, including opportunities to run off-lead. They also enjoy dog sports, such as fly ball and agility.

Like all dogs, the Japanese Spitz requires regular worming, fleas and tick treatments. Consult your local vet on treatment options. Desexing and vaccination against diseases, such as the parvo virus and infectious dog (canine) cough, are also important to discuss with your vet.

These affectionate dogs love a cuddle and constant human companionship.

They are a great pet for both children and older people and can live happily in an apartment as long as they have a daily walk.