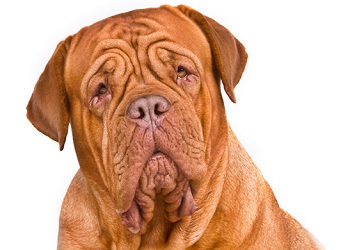 The Dogue de Bordeaux is an ancient French dog from the regions around Bordeaux in Southern France. It is also called the Bordeaux Mastiff or the French Mastiff. While its origins are not entirely certain, it is thought that these dogs descended from the breeds of Mastiff that accompanied the Roman Armies during invasions in Europe.

The Dogue de Bordeaux was used as a guardian and hunter. The dogs were considered a rare breed but are no longer. They were not commonly found in French households, but were instead owned by the wealthy upper classes and those with nobility. As such, they miraculously survived extinction in two world wars. The breed had resurgence in popularity in the 1960s, and was brought to Australia in the 1990s.

Tom Hanks helped to make this breed famous – the drooling co-star of the film ‘Turner & Hooch’ was a Dogue de Bordeaux.

Typical of its French origins, the Dogue De Bordeaux is a ‘lover’ not a ‘fighter

Dogue de Bordeauxs are a ‘dissuasive breed’ – they put people off by their looks and are not known for aggression or confrontation. Described as having great courage without aggression, these dogs make excellent companions. They are protective and vigilant by nature. Powerful with a stocky, muscular build, these dogs can seem quite intimidating, but are actually even-tempered by nature and make wonderful pets.

They are a loyal and alert house dog, letting you know when someone is around, but they are not known for being a watchdog or guard dog – some Dogue de Bordeauxs would happily let people into the house to steal everything if it meant they would get a pat!

The breed doesn’t have high energy levels and prefers to be inside with the family than outside. They don’t require an active home, but an indoor home, definitely. Dogue de Bordeauxs don’t need a lot of exercise. They can also snore and drool – mainly when food is around, when they get excited or have had a drink of water.

Because of their size and strength need to be carefully monitored around small children and the elderly. Some pups have been known to knock grown men over in play!

This breed is intelligent and easy to train and will respond best to an affectionate, but assertive master. These dogs can have a tendency to be stubborn and dominant too, so early socialisation and obedience training is critical.

The Dogue De Bordeaux has a coat of short, fine, soft hair, requiring an occasional brush. The wrinkled snout needs checking for dust and dirt as these can cause discomfort and skin problems. Wipe the face with a damp cloth daily.

It’s recommended that the Dogue De Bordeaux has a daily walk of at least 30 mins in the cool of the morning or evening – not in hot temperatures.

Like all dogs, the Dogue De Bordeaux requires regular tick, flea, intestinal worms and heartworm treatments. Consult your veterinarian on treatment options. Desexing and vaccination against diseases, such as the deadly parvo virus and highly infectious canine cough, are also important to discuss with your vet.

Dogue De Bordeauxs are fantastic with kids of all ages as they are a very tolerant breed, but they can knock little kids over when excited. Families with older children and experienced owners are best suited to this breed because its sheer size and strength can be a problem if not handled with care, especially in those early years when the dog has reached its full adult size, but still has a puppy mentality.

The Dogue De Bordeaux is suitable for apartment living, as long as they have sufficient exercise, but a medium-sized yard is best. This breed prefers to be indoors, but watch out for your furniture and your ornaments! It’s important to remember that these dogs can drool a lot, so if you don’t want to be slobbered on (more so in the warmer months), then this is not the dog for you!