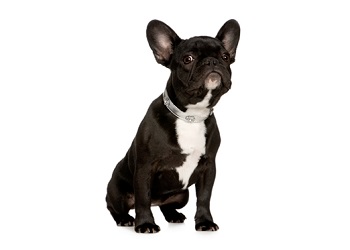 Others argue the French Bulldog originated from the Spanish Bulldog or the British Bulldog. During the Industrial Revolution, lace makers from Nottingham (which was a great center for British Bulldogs, including the toy bulldogs) migrated to France in search of work accompanied by their small bulldogs.

The miniature bulldogs in France are then believed to have been crossed with terriers and pugs, and the French Bulldog evolved, becoming a fashionable companion on the streets of Paris.

French Bulldogs are small and sturdy little dogs with ears large and round resembling those of a bat – a main feature of the breed. They are brave, intelligent and highly affectionate.

These vivacious dogs are sometimes called ‘Frenchies’ and referred to as the ‘clown of the dog world’. They thrive on human company and need to be included in family activities. Frenchies can become destructive if they are left alone for long periods.

The French Bulldog is also generally very agile, able to spring up onto high ground (ie sofas, chairs, beds) in a single leap without even having to step back and take a run at it. During play, they often jump up into mid air, turn 180 degrees and land facing the other direction!

French Bulldogs are easily trained and are good watchdogs. They may be little, but will stand their ground if confronted by strangers.

French Bulldogs do not need to be groomed often as they have a lovely short and fine coat. Regular brushing will do. This breed is also an average shedder.

Like all dogs, they require regular tick, flea, intestinal worms and heartworm treatments. Consult your veterinarian on treatment options. Desexing and vaccination against diseases, such as the deadly parvo virus and highly infectious canine cough, are also important to discuss with your vet.

Being an active dog, Frenchies will benefit from regular exercise, such as a daily walk. They enjoy participating in just about any family activity. However, owners need to be cautious about exercising their French Bulldogs in the summertime because they don’t tolerate hot weather well and are prone to heat stress. They are a brachycephalic breed (short nose and flat face) and must avoid the heat and strenuous exercise during the warmer months.

Also, French Bulldogs cannot swim because of their physique, so care must be taken around swimming pools.

French Bulldogs thrive on human companionship and are not a breed that can be left alone in the backyard. They are ideal for apartment living, for the elderly, families with children and singles who have time to devote to a dog.

Frenchies are reliable with children; however, like with any dog, supervision is important when around children.