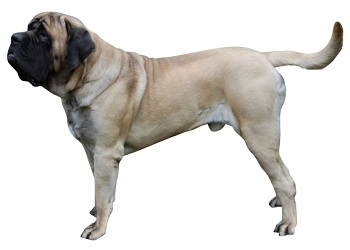 It is believed that the ancestors of the English Mastiff were bought to Britain from Central Asia around 500BC. Marco Polo wrote of Kublah Khan’s kennel of thousands of great Mastiffs, which he kept for hunting and war.

The Romans discovered the breed after its arrival in Britain and used it also for war purposes. It’s believed the Mastiff was Cesar’s favorite dog. The breed became much depleted during World War II with only seven dogs remaining in Britain by the end of 1947. This led to enthusiasts breeding the English Mastiff with Mastiffs brought back from America, and by 1950 there were around 50 dogs in Britain and the breed was considered ‘revived’.

Even today these dogs are not common, but they are praised for their even temperament and good nature, and are considered wonderful family companions.

The English Mastiff is a great family companion.

Calm, obedient and loyal, the English Mastiff is a well-mannered house pet. Home is where the heart is for the Mastiff, who is affectionate and protective. They are excellent guard dogs and will rarely attack an intruder (unless provoked). Instead, they will stand intimidatingly using a low throaty growl, ‘blocking’ the stranger until a familiar human arrives.

English Mastiffs are the largest breed of dog in terms of body mass (not height). Because of this, a healthy diet and moderate exercise are crucial throughout their lives for maintaining good health. Strenuous activities (such as running, jumping and rough playing) should be avoided until the dog reaches its full adult size with properly formed joints and bones. This occurs by the time the dog is about two years of age. Puppies below six months should not be exercised.

Daily exercise is recommended, otherwise these dogs can become lazy and overweight, which can lead to health complications. Mastiffs are known to drool, wheeze and snore loudly.

English Mastiffs have a fine, smooth, short coat. Despite this, they shed considerably so daily brushing and regular washing can help get rid of excess hair. Mastiffs grow too big to be easily fitted into the bathtub or into the car for a trip to the local grooming salon so get your pup used to the idea of a bath at home under the hose.

Mastiffs tend to be lazy but they are happier with regular exercise, such as a daily walk.

Like all dogs, English Mastiffs require regular tick, flea, intestinal worms and heartworm treatments. Consult your veterinarian on treatment options. Desexing and vaccination against diseases, such as the deadly parvo virus and highly infectious canine cough, are also important to discuss with your vet.

English Mastiffs are great pets and tend to be very gentle. However, they do need to be well socialized as pups and, like all dogs, need to be supervised around children. Their size and strength means they are not ideal companions for the elderly, which is a shame because they have a wonderful, loving disposition.

Most dogs enjoy a back yard and the Mastiff is no exception. They are not excessive barkers either so living in close proximity to neighbors is not a problem.