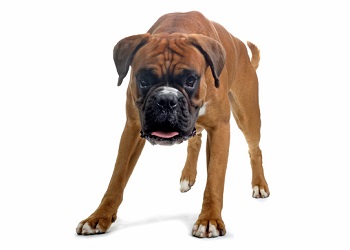 The Boxer originates are traced back to late 19th century Germany. The breed is related to the Old English Bulldog and the Bullenbeisser, a breed that is now extinct. From there the breed was introduced to other parts of Europe and to the United States at the turn of the 20th century.

During World War I, the Boxer was used for military work, as a valuable messenger dog, pack-carrier, attack dog and guard dog. It was after World War II that the loyal breed became popular around the world. It was introduced to a wider audience after the war as soldiers returned home with them. The breed soon became a favorite as a companion, a show dog and a guard dog.

The cheerful and bouncy Boxer is happiest with its family.

Known as big ‘goof-balls’, the Boxer’s personality is happy and cheerful. The Boxer is often described as the clown of the dog world, and are happiest when they are with their family. They also adore children and are generally pretty good with them.

Be prepared for your heart to melt as their human- like expression let them get away with just about anything. It’s their eager-to-please nature that makes them adaptable to any kind of family situation and they see themselves as an extension of the family. They are just as happy to be couch potatoes as they are running marathons. Overall, their temperament is what you make of it; like any dog they will act the way you have taught them to.

Boxers have high energy levels and still believe they are playful pups well into their adult years so they do need quite a bit of exercise to keep them happy. They are very powerful and strong, which is why training during the puppy months is essential to help control their exuberance as they get older. Much like children they require stimulation so they don’t get bored and destructive.

As the breed is known as a great guard dog, Boxers watchdog instincts are very well developed. However, this all depends on their training from very early on. The breed is quite easy to train with plenty of persistence and repetition not to mention positive reinforcement.

In terms of grooming Boxers need very little, once a week is sufficient. A rubber glove will rid them of any excess coat. Other than that, a wet Chamois once a week can help to rid them of dust. A thorough bath will be needed once a fortnight. Bathing would be less in winter maybe once a month.

Daily exercise is essential for your Boxer, who love being active with their families. They love going for walks, jogging and fetching the ball, and also make excellent cycling partners and some even enjoy swimming.

Like all dogs, Boxers require regular tick, flea, intestinal worms and heartworm treatments. Consult your veterinarian on treatment options. Desexing and vaccination against diseases, such as the deadly parvo virus and highly infectious canine cough, are also important to discuss with your vet.

Boxers adapt quite easily to their environment as long as they are treated as a family member. They are very loyal and great with children as long as both dog and child are taught how to behave around one another.

Due to the energy levels of this breed, it is best suited to a family or person who leads an active lifestyle. That being said Boxers being quite boisterous may need more space than a unit or apartment has to offer and a large yard for the dog to run around in would be ideal.