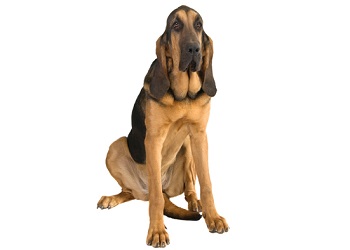 The Bloodhound is a direct descendant of the St Hubert and Talbot hounds, developed in the Middle Ages and introduced to England by William the Conqueror. It was originally bred to hunt wild game, though it was not until the 16th century that they were used to track down poachers and sheep thieves.

Their ability to hunt down the perpetrators were so highly regarded that they were given a legal right to follow a trail anywhere, including homes. Anyone refusing the hounds to enter their homes was assumed to be involved in the crime and punished.

In the 1700s they were then imported to the Americas, where they were originally used to chase down marauding native Indians. It is in USA that the Bloodhound is truly recognized for its tracking abilities, with their testimony used as evidence in a court a law.

Because the Bloodhound has a highly developed sense of smell, with the ability to scent discriminate and hone in on ONE single scent, they are today used extensively to trail missing people, criminals, escaped prisoners and lost children.

Bloodhounds are affectionate dogs with their family, and magnificent trackers.

The Bloodhound can be a little reserved around strangers but is normally a gentle, affectionate and even-tempered dog, making it is an excellent family pet.

Basic obedience training is required from an early age as the breed, like any hound, is headstrong and can be possessive of food and toys. Rules need to be made from day one of getting your hound, and those rules consistently kept.

Bloodhounds are active dogs and need a large, well-fenced garden. They need a daily walk on a lead and thrive on vigorous activity. However, they can be willful and challenging to train and due to its size it needs to be supervised around children.

They must be on a lead at all times during a walk, for if they find an interesting scent to follow, they are off, and this takes precedence over coming when called. Being pack dogs, they are better-suited to having some form of company whether it be another dog or human.

When awake, Bloodhounds can be good watch dogs, but not guard dogs.

The eyes and ears of a Bloodhound need to be checked and wiped daily. Although short-haired, their coat needs a weekly brush and depending on their living arrangements, a bath is only required when needed. Not only do they drool and slobber, they can be clumsy, so they may not be the best dog to have inside the house.

Bloodhounds require a lot of exercise, such as a long daily walk, and enjoy a good run. Their high level of stamina allows them to walk for hours on end. However, avoid overtiring them with walks until they are fully grown.

Like all dogs, Bloodhounds require regular tick, flea, intestinal worms and heartworm treatments. Consult your veterinarian on treatment options. Desexing and vaccination against diseases, such as the deadly parvo virus and highly infectious canine cough, are also important to discuss with your vet.

Bloodhounds are ideal for people who love the outdoors and want their dog at their side. They are great for active people and good with children over ten years of age. They are not a dog for the elderly.

If given sufficient daily exercise they can live in a small unit, though they are happiest in an average-sized yard.