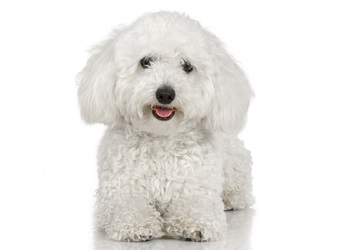 The small, curly, white lap dog, the Bichon Frise, is slightly larger than the Maltese. These appealing dogs descended from the Barbet (or Water Spaniel) and originated from the Mediterranean. They had a lively disposition and were companion dogs to sailors who often traded them as they traveled, meaning the little dogs established themselves in Spain, France, Belgium, Italy and Tenerife in the Canary Islands.

The Bichon Frise was adopted as a preferred breed by French nobility. These dogs were loved in the court of Henry III in the 16th Century (having thought to have come from Italy from the court of Rome) and can also be seen in the works of the Spanish artist Francisco de Goya. Bichons had a resurgence of popularity during the rule of Napoleon III, but then waned until the late 19th Century becoming a common street dog seen with organ grinders and in circuses.

The Bichon Frise is first and foremost a companion dog; therefore it does well with a family that includes the dog in all activities. Their temperament is gentle, playful and affectionate and they love human company – especially a lap to sit on.

Bichons need a lot of human attention. They are also great for children as they have high energy levels. They generally get along well with other animals.

They are also obedient and easy to train, especially if training is started early and done consistently. They are highly food-motivated. The Bichon Frise is an alert but not aggressive watchdog.

Grooming must be done daily. Their coats need regular trimming and brushing, and a regular bath is also needed. Every eight weeks the Bichon needs professional grooming but with daily brushing in between. If this is not done, severe matting may occur. If clipped fairly short, the need for constant coat brushing and grooming are minimized.

The Bichon Frise is both high-energy and high-maintenance. They need lots of exercise – they particularly love water and toys to play with. They can become destructive if left alone for long periods and can show other signs of separation anxiety, such as barking.

Like all dogs, the Bichon Frise require regular tick, flea, intestinal worms and heartworm treatments. Consult your veterinarian on treatment options. Desexing and vaccination against diseases, such as the deadly parvo virus and highly infectious canine cough, are also important to discuss with your vet.

The Bichon Frise is a great dog for couples, singles, families and elderly people.

As long as they have regular exercise, the Bichon Frise is suitable for a small house and garden and is also suitable for apartment living.